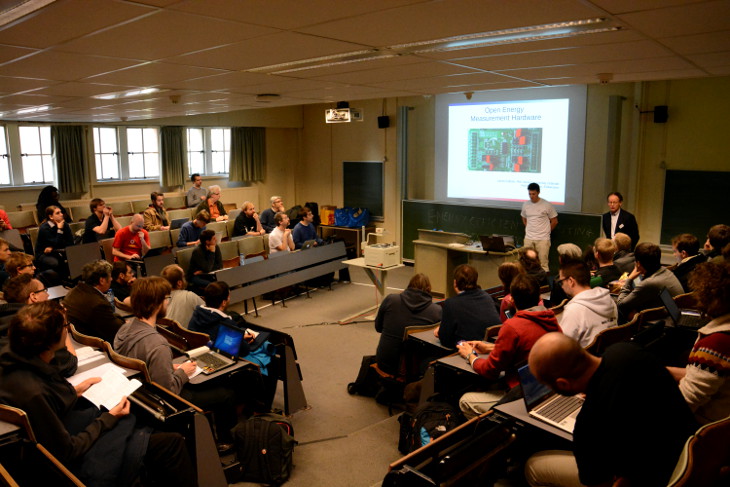 Hosting a project stand and a developer room at the world’s biggest open source conference.

Every year in February some 5,000+ open source advocates journey from across Europe and much farther afield to congregate in Brussels for a weekend of talks, workshops and discussion, and to meet friends old and new.

It’s not just headline figures that make FOSDEM stand out from all other open source conferences, or even the fact that it costs nothing to attend (donations are welcome), and rather instead it’s the palpable sense of community and that, through collaboration, anything is possible.

Machine Guided Energy-efficient Compilation (MAGEEC) is an 18 month research project to create a compiler framework that is capable of generating code with improved energy efficiency. Project outputs include open source software and hardware, with the latter being a board that allows precise measurement (millions of samples/second!) of the energy consumed by a computer.

The entire MAGEEC project team — comprising researchers and students from the University of Bristol, and industrial partners, Embecosm and myself — headed along to FOSDEM to host a stand, and engage with the wider community, and to seek feedback and potential collaboration.

James Pallister giving a live demonstration as part of this talk

On the Sunday we also hosted a developer room dedicated to the broader topic of energy-aware computing at the different levels within the computer system stack. This featured talks on the motivations, basic principles, measuring and modelling energy consumption, APIs for tracing and reporting energy usage, an energy-aware computing framework and, of course, MAGEEC.

In the middle of the day we ran a workshop at which participants were able to gain hands-on experience with the MAGEEC energy measurement infrastructure, using a target of a minimal Arduino-compatible, one of a selection of boards we’d brought, or the participant’s own.

At least one person was brave enough to bring along their own hardware and to have this modified in order that the power supply to the processor could be intercepted, by removing an inductor so that the energy measurement shield could be connected in-line.

Steve Kerrison modifying a target board

The software-defined radio developer room was next door to ours and I managed to make it to the opening talk from GNU Radio project lead, Tom Rondeau, who gave a fantastic introduction to signal processing, which was accompanied by live demonstrations using GNU Radio Companion.

Our dev room was well attended, but I must say, the SDR dev room was extremely popular and most visibility demonstrated the significant and continuing growth in interest in open source SDR; above can be seen the queue extending from a packed room and all the way down the stairs!

I had hoped to also make it along to Sylvain Munaut’s overview of Osmocom SDR projects, but as I ascended the staircase I could see people queuing outside a closed door. However, later on I did manage to catch a talk from Ismael Gomez introducing libLTE, an open source LTE library which may just provide the foundations for future open source powered 4G mobile network infrastructure.

As far as I am aware all the developer room talks were recorded and should be up on the FOSDEM website in due course, and I know I’ll certainly be watching those I missed from the SDR dev room.

Looking forward to next year

My role was as organiser for the energy-efficient computing developer room. I’ve no idea whether I’ll be involved in organising a dev room next year, but I plan to head along to FOSDEM regardless. It’s a fantastic event and thoroughly recommended to anyone who has not been before. The only downside? So many talks, and interesting and worthwhile conversations to be had, but only two days!