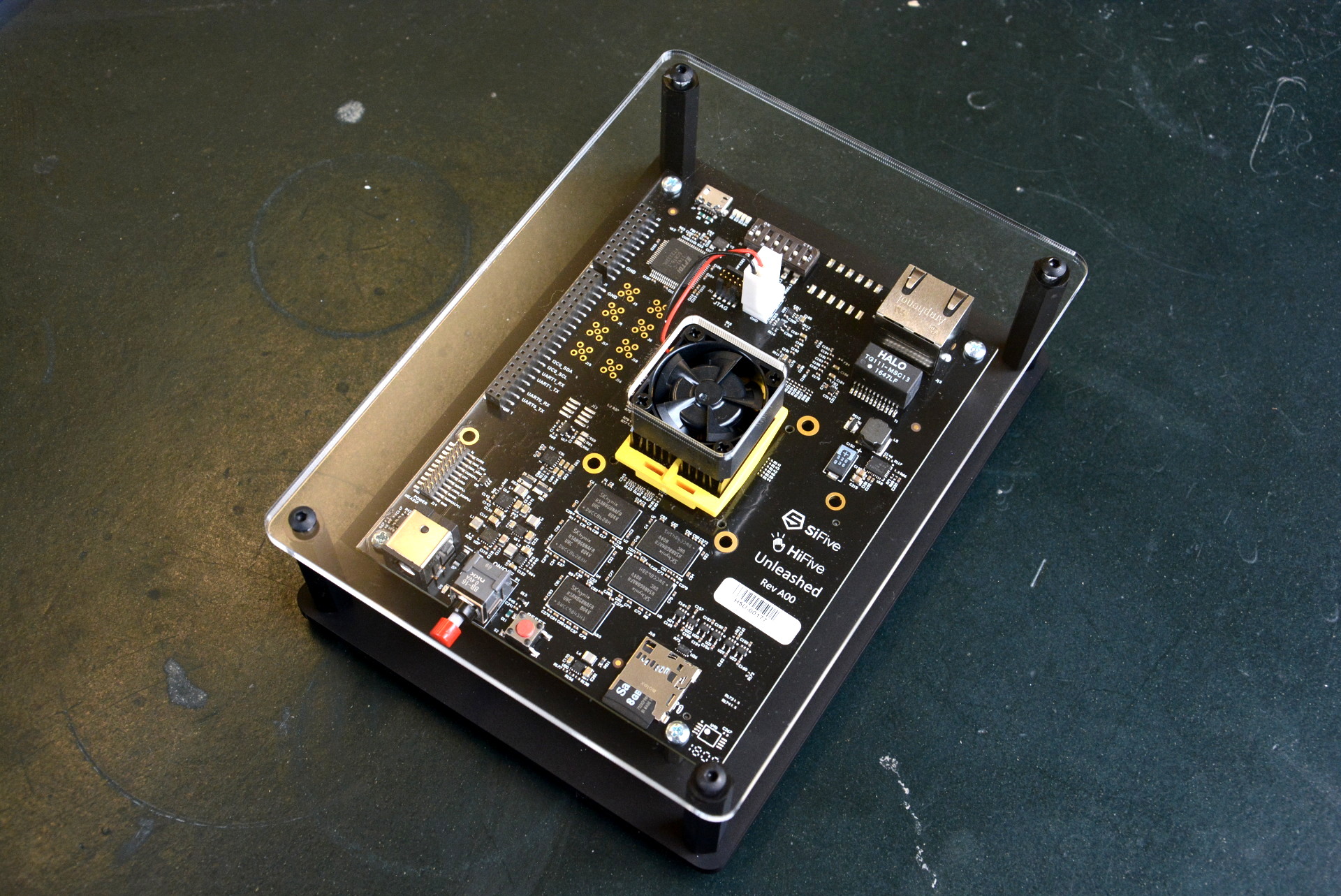 First unveiled back at FOSDEM, the SiFive HiFive Unleashed Linux-compatible RISC-V development board heralds an exciting time in the world of free and open source silicon – and AB Open’s Andrew Back has been working with one.

“It’s great that we now have a Linux capable development board for 64-bit RISC-V in ASIC, with features including plenty of RAM, gigabit Ethernet and flash storage,” Andrew writes in the conclusion of his detailed out-of-the-box experience write-up. “Everything is in place to start right away generating a custom Linux system plus applications via Buildroot and Poky. Meanwhile mainstream Linux distro support appears to be progressing at a reasonable pace.”

More information on the HiFive Unleashed itself, meanwhile, can be found on the Crowd Supply campaign page.

Semiconductor Engineering’s Jeff Dorsch has penned a piece on hardware-in-the-loop (HIL) simulation and testing, positioning it as having “a growing role” in the world of embedded system design.

“Embedded electronics are showing up nearly everywhere these days, in cars, smart appliances, medical devices—even fighter jets. Making sure those real-time embedded systems will work correctly is the aim of hardware-in-the-loop simulation and testing, which puts the systems through their paces in a virtual environment,” Jeff explains. “In effect, HIL simulation adds a mathematical representation of all functional areas within a system.

“HIL is just one piece of the testing that is required. There also is built-in self-test, system-level test, in-circuit monitoring, automated test for chips, testing of software, as well as an increasing amount of pre- and post-production simulation to ensure that systems such as the AI logic in autonomous vehicles continue to work as expected. Still, HIL has a growing role here, which may seem surprising considering that hardware in the loop testing and simulation are not new concepts. They have been actively deployed for at least a couple of decades. What’s changing is the complexity of the systems being simulated and tested is growing, there is an increasing focus on divide-and-conquer approaches, and the devices being used to test them are shrinking in size.”

The full article, which includes input from Astronci’s Anil Bhalla, National Instruments’ Doug Farrell, and Vector’s John Simion, can be found over on Semiconductor Engineering now.

Cypress Semiconductor and Semtech Corporation have announced their collaboration on a new, two-chip module combining a microcontroller with a long-range low-power LoRaWAN radio, to first appear in the Onethinx Core.

“With its long range and low power capabilities in a compact footprint, Semtech’s LoRa Technology is ideal for vertical applications,” claims Vivek Mohan, director of Internet of Things (IoT) projects in Semtech’s Wireless and Sensing Products Group. “Combining LoRa Technology with Cypress’ PSoC 6 MCU in a purpose-built IoT module will accelerate the delivery of leading-edge IoT solutions for smarter cities and a smarter planet.”

Featuring a dual-core ARM Cortex-M processor, Bluetooth 5.0 and LoRa connectivity, the two-chip solution will first appear in the Onethinx Core module. Pricing and a formal release date have not yet been confirmed, with Onethinx currently accepting sample requests.

Improved LoRaWAN hardware is certainly welcome following the City of York Council’s announcement of a deal with Pinacl to launch a LoRaWAN network, which it pledges will be open access and available for Internet of Things (IoT) entrepreneurs and tinkerers to use.

Pinacl, which entered into a managed service contract with the Council in 2009 and has worked to provide a dark fibre network for council use as well as a public Wi-Fi network, has confirmed it will be installing an initial four LoRaWAN gateways at specially-selected points in the city to provide as wide-reaching coverage as possible.

“Given our commitment to help create a truly Smart City – built on York’s world-class infrastructure – Pinacl’s LoRaWAN offer immediately caught our eye as a hugely scalable yet relatively low-cost solution that can really deliver on the enormous potential of IoT,” says Simon Donnelly, ICT digital manager at York Council. “By generating city-scale intelligence across many of our key assets, it will enable us to realise significant efficiencies through early intervention and more targeted resourcing, in turn creating better outcomes for our customers.”

While the network will be available for Council use, Pinacle has stated that it will be “open-access [through] a desire to drive innovation and encourage entrepreneurs from the local area, leveraging a living city wide LoRaWAN network covering large parts of the city.”

The first two of AB Open’s videos from the Wuthering Bytes Festival 2017 are now published, beginning with the opening keynote by Dr. David Hartley FBCS.

Director of the University of Cambridge Computing Service from 1970–1994, Chief Executive of United Kingdom Joint Academic Network (JANET) 1994–1997, and involved the development of the programming language CPL, whose influence can be traced on to C, and C++, Dr. Hartley’s talk covers the early history of computing in Britain — charted via his own personal journey, from growing up in a northern mill town, a scholarship at Cambridge and being supervised by Maurice Wilkes, to running JANET and building the Cambridge computer network.

The second, also from Festival Day, is of Caroline Gorksi’s talk entitled, Learning to speak machine – devices, communications, and the talkative ape. In this Caroline explores how interconnected devices will play an ever-increasingly intimate role in our lives, Asking the questions, “How will we respond to ever-present, ever-listening, ever-communicating technology – and how will the future of communications technology change the way we think about ourselves, our interactions and our ability to be heard?”

The videos are live now on AB Open’s YouTube channel.