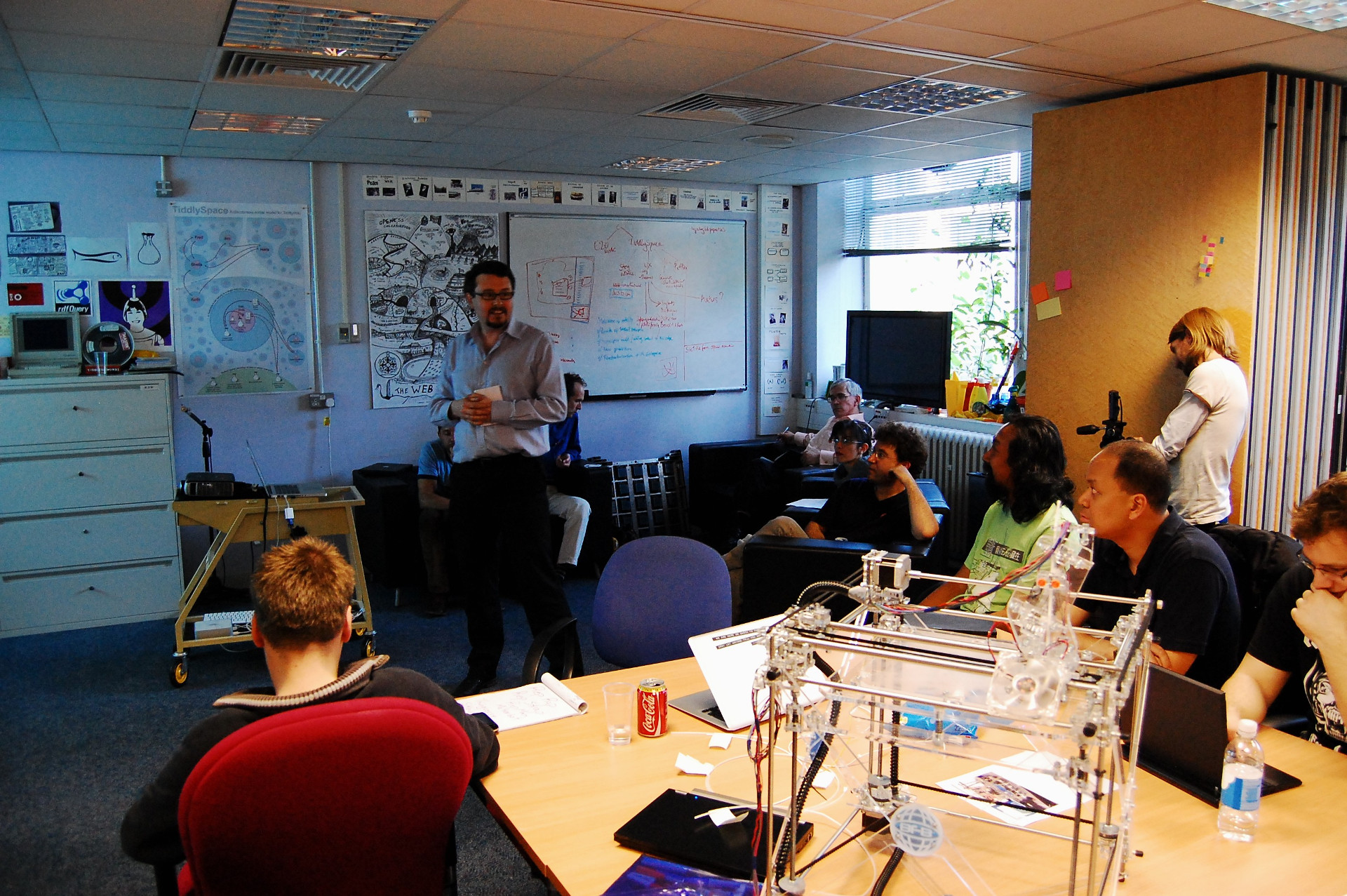 AB Open’s Andrew Back recalls the founding of OSHUG: “The nascent open hardware movement had started to gather momentum and in December 2009, Nesta, the UK based charity and innovation foundation, hosted a one day event dedicated to the topic. This served as a pivotal moment for many of those of us who attended and one outcome of this being the formation of the Open Source Hardware User Group.

“OSHUG was co-founded in early 2010 by Paul Downey, Alan Wood and myself. Inspired by the Nesta event and also encouraged by UK semiconductor company, XMOS, which had decided to publish its development board designs as open hardware. Fortunately, Paul and I both worked for BT’s open source innovation unit, Osmosoft, where community events were part of its remit.”

Back’s full article, which includes his introduction to the world of open hardware, OSHUG’s early years, and a look at the future of the open hardware movement, is available to read now.

AB Open is proud to announce its membership of OpenHW Group, a not-for-profit organisation founded to provide an infrastructure for open hardware development with a focus on free and open source silicon, tools, and related software.

Founded in June 2019, OpenHW Group aims to encourage adoption of free and open source silicon technologies — including, but not limited to, core intellectual property (IP) provided under permissive licensing — by acting as a focal point for ecosystem development. Counting major industry pioneers among its members, the OpenHW Group ecosystem has grown to over 45 members and partners since its launch last year, and now counts AB Open among them.

“As a company specialising in community building and with a particular focus on open source hardware, AB Open is thrilled to join OpenHW Group — an organisation which at its core shares our ethos of collaboration and freedom to innovate,” says AB Open Managing Director, Andrew Back. “As an OpenHW Group member company we look forward to contributing to the development of an open hardware ecosystem, the fruits of which a great many will stand to benefit from.”

“The team at AB Open has many years of experience contributing to and building open, collaborative hardware based ecosytems,” says OpenHW Group President & CEO, Rick O’Connor. “We are thrilled to welcome AB Open into the OpenHW Group community and we are particularly excited as we anticipate the contributions that AB Open will make.”

As a member, AB Open will be participating in working groups and collaborative projects, working together with other OpenHW Group members, towards the shared vision of an ecosystem that will bring many of the same benefits seen with open source software to the semiconductor industry.

More information on OpenHW Group can be found on the official website.

The OpenPOWER Foundation has officially released the compliance definition for its now-open instruction set architecture, defining test suite requirements for both POWER8 and POWER9 ISAs, and has pledged to form a new Work Group for ISA-related activities.

“There is much excitement in the August 2019 announcement of open-sourcing the POWER Instruction Set Architecture (ISA), which provides the opportunity for experimentation and collaboration,” says Sandy Woodward, chair of the OpenPOWER Foundation Compliance Work Group. “When the hardware implementation of the ISA matures into a product, OpenPOWER ISA Compliance Definition comes in to play to ensure that software shown to execute properly on one compliant processor implementation will execute properly on a different also compliant processor implementation.

Woodward has indicated that the Foundation is happy to accept comments and feedback on both compliance documents via the Compliance Work Group mailing list.

The RISC-V Foundation has announced the formal ratification of the processor trace specification, introducing a standardised trace encoder algorithm for the free and open-source instruction set architecture as a means of assisting with debugging.

“RISC-V is rapidly gaining popularity due to its open and modular design that supports customisation on top of a standard core ISA,” says Krste Asanović, chair of the RISC-V Foundation Board of Directors. “The RISC-V ecosystem continues to showcase a large degree of interoperability among various vendors’ implementations.

“Understanding a system’s program behaviour is often quite difficult, especially when working with complex systems for the HPC, Internet of Things, machine learning and artificial intelligence,” adds Gajinder Panesar, chair of the RISC-V Foundation’s Trace and Debug Standing Committee. “Developers and engineers spend around 50-75 percent of their time debugging and integrating tools and extensions.

The trace specification is available now on the RISC-V Foundation website, alongside the ISA specification and version 0.1 of the in-progress compliance framework.

CERN has officially released version 2.0 of its eponymous Open Hardware Licence (CERN-OHL), designed to simplify the language and make it easier to understand as well as broadening its applicability and introducing three variants for specific requirements.

“The CERN-OHL is to hardware what the free and open-source licences are to software,” says Myriam Ayass, legal adviser for the CERN Knowledge Transfer Group, of the licence. “It defines the conditions under which a licensee will be able to use or modify the licensed material. It shares the same principles as free software or open-source software: anyone should be able to see the source – the design documentation in the case of hardware – study it, modify it and share it.”

“Open hardware gives designers and users the freedom to share hardware designs, modify them, manufacture products based on the design files and commercialise those products,” adds Javier Serrano, founder of the Open Hardware Repository (OHR). “This freedom enables collaboration among engineers, scientists, researchers, hobbyists and companies without the risk of vendor lock-in or other issues present in proprietary development.”

The latest version of the licence comes in three variants, in place of the one-size-fits-all original: Strongly reciprocal, weakly reciprocal, and permissive, allowing project creators to decide whether they want to require derivatives and modifications to be released under the same licence.

The CERN-OHL 2.0 is available now from the CERN website; the organisation has indicated that it will be submitting it to the Open Source Initiative (OSI) and Free Software Foundation (FSF) for endorsement in the near future.

Finally, the Eclipse Foundation, which acts as a not-for-profit steward of the Eclipse open source software development community working on projects as diverse as edge computing, artificial intelligence, and free and open source silicon, has announced it is moving to Europe – a move which it says will enable it to better foster international growth and collaboration.

”Over the last several years, the Eclipse Foundation has grown its membership with technology leaders from around the world, particularly in Europe,” says Mike Milinkovich, executive director of the Eclipse Foundation, of the move. “Open source is driving international innovation and collaboration, and has become strategic to European industry.

“It was an easy decision to focus more resources on this critical geography while continuing to welcome and support new members from around the globe. From our new base in Europe, we look forward to continuing to foster the growth of a global, sustainable open source ecosystem that delivers broad benefits to developers and the many industries we serve.”

The move will see the Eclipse Foundation shifted to become a Belgian international non-profit association by July this year, and comes with the launch of a dedicated project development forge based on GitLab and physically hosted in Europe – the third Eclipse Foundation development forge to be established, and to be run alongside the existing two as an option for those who would rather their work be hosted in Europe.

“By creating the Eclipse Foundation AISBL, an international non-profit association based in Brussels, we are furthering our vision of the Eclipse Foundation as a global institution that builds on our existing membership base, active developer community, and strong institutional relationships to enable the free flow of open software innovation. We believe that our transition to Europe will help to advance toward this goal, for the benefit of industries and developer communities worldwide.”

More information on the move is available on the Eclipse Foundation blog, while those who are interested in getting involved with the Foundation can find out how on the official website.