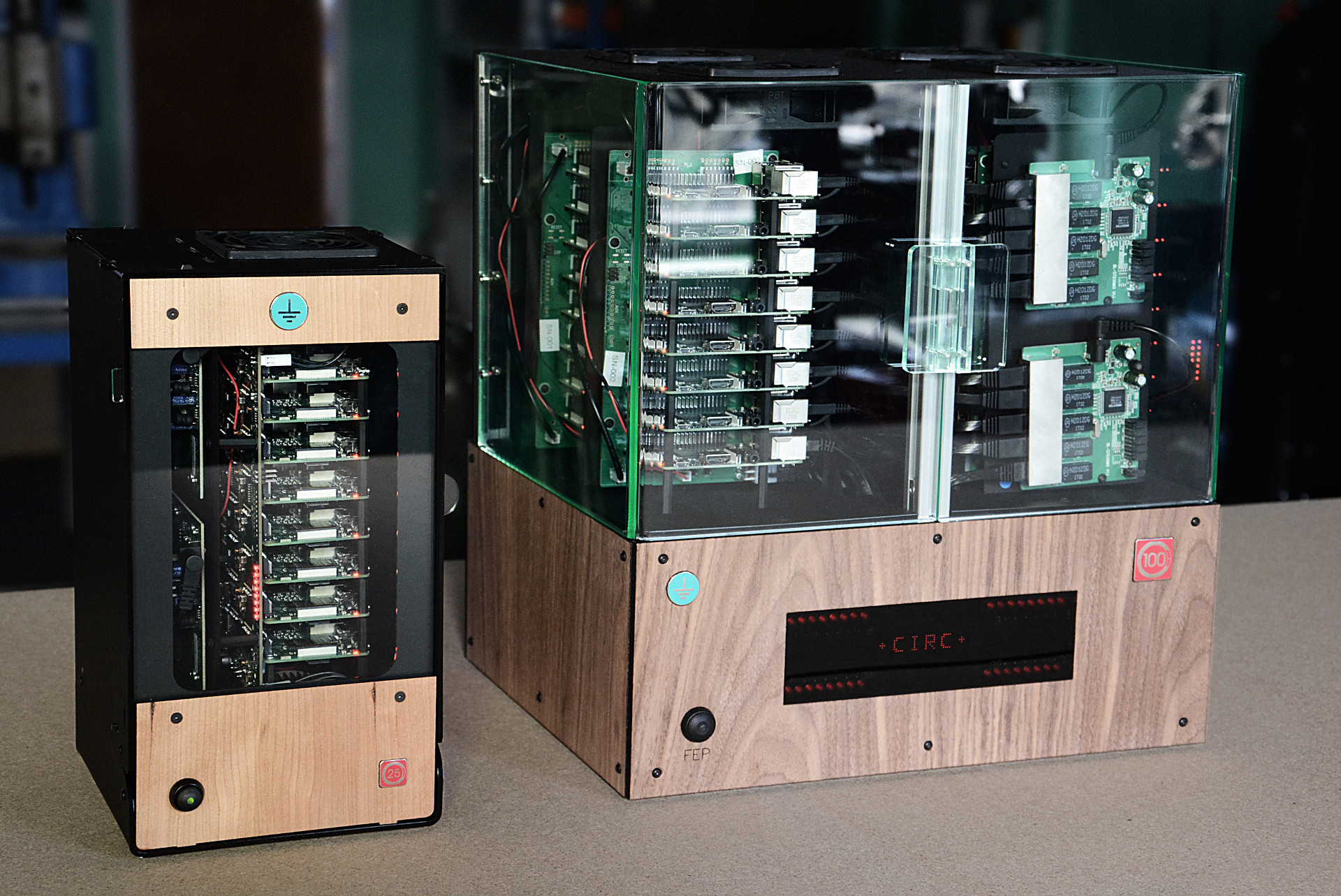 Available to pre-order now on crowdfunding site Crowd Supply, the Circumference C25 boasts support for up to eight Raspberry Pi computers while the Circumference C100 can hold up to 32 giving it a total maximum capacity of 128 64-bit low-power Arm processing cores and 32GB of RAM. Both units include a UDOO x86 control node, known as the Front-End Processor (FEP), and a custom electronic backplane system designed by Ground Electronics – creating the first truly standalone Raspberry Pi cluster solution on the market.

“The complexity of application architectures is ever increasing, with components spread across multiple servers, virtual machines, containers, and increasing making use of advanced systems for dynamic deployment, scaling, and management,” explains AB Open’s Andrew Back of the project. “While development, testing, and education in such applications is sometimes possible using virtual machines, it doesn’t provide quite the same environment or hands-on experience as using multiple physical host machines. The Circumference solves this problem, offering a fully-functional compute cluster in an attractive box that doesn’t look out of place on your office desk or draw masses of power to run.”

Featuring integrated and user-controllable power and network distribution, each Circumference is fully user-controllable through a command-line interface or application programming interface (API) running on the Front-End Processor or any host on the same network. The clever backplane design makes for easy hardware installation and maintenance, while the attractive housing serves as both an eye-catching design statement and protection for the hardware inside. The C100 also includes a front panel module, based on Arduino technology, for user-programmable at-a-glance status monitoring.

The campaign sees the Circumference C25 priced at $549 for the first 25 Early Bird pledges rising to $599 when these are gone, representing a $50 discount over the campaign general pricing, and the C100 priced at $2,599. Each unit includes all the custom hardware and cabling required for cluster operation, including the backplane and network switches, requiring the user to supply only the Raspberry Pi and UDOO x86 boards, storage, and a power supply. The C25 is also available in an Early Access tier, which will be shipped two months earlier than the general tiers.

More information on the Circumference family and additional reward tiers can be found on the Crowd Supply campaign page.

Ground Electronics is the hardware division of AB Open, and the company behind the Circumference design. Previous successful projects include a compact cluster computing kit based on the Adapteva Parallella single-board computer, custom-designed electronics housings, and the open-source MAGEEC WAND Energy Measurement Kit.

The Raspberry Pi family of single-board computers has become the best selling in history thanks to its accessibility and low cost. Offering four 64-bit Arm processing cores in its latest incarnation, the Raspberry Pi 3 Model B+, the boards make a perfect basis for low-cost and low-power cluster computing yet have a high enough performance for production as well as educational and development use.

The UDOO x86 single-board computer, used in the Circumference systems as the front-end processor (FEP) node, is based on a quad-core Intel processor and features integrated microcontroller functionality compatible with the popular Arduino Integrated Development Environment (IDE). The board is compatible with all major operating systems.

All pricing in this release is exclusive of any local taxation which may apply, depending on the country in which a backer resides.