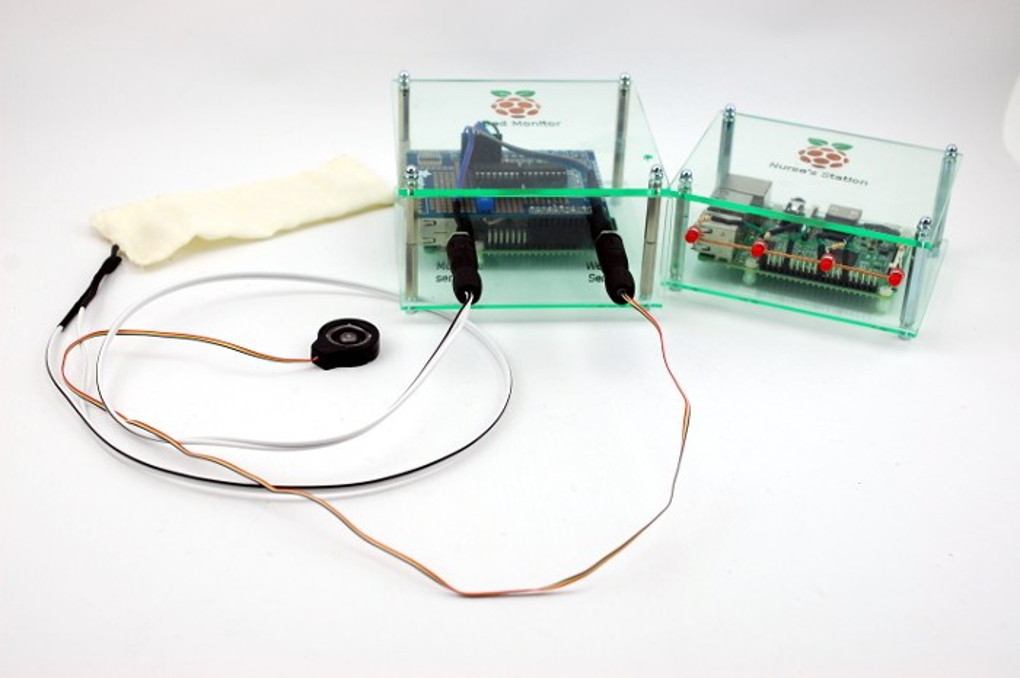 Natasha Bissett completed an internship at AB Open during early 2017, while also studying towards a HND in Electrical and Electronic Engineering.

Over the course of starting intern at AB Open and undertake this project, I’ve learned more here than I did in my whole time in formal education. Well, that might be a slight exaggeration, but only slight.

My project was to produce a bed monitoring system for hospital use — something that senses a wet bed and turns on a discrete light next to a corresponding bed number on a panel at a nurse’s station.

I am practically the only female in my family that doesn’t work for the NHS and when I was given the task to create a device that solves a problem or improves a situation, I knew exactly what I wanted to do.

I have heard so many stories about problems and daily occurrences on wards and pondered a few times over why the NHS doesn’t utilise electronics to make life easier for themselves and improve their service. For example, some patients need to be weighed several times a day to quantitate the dose of their medicines. Often they are elderly or bedbound and this causes a lot of pain or is just out-and-out impossible to do.

The fact that troubled me the most was that currently the target on Bradford Teaching Hospitals NHS Foundation Trust wards is to check the bedsheets of bed bound patients every 4 hours. This means that a patient could be checked at 9am, wet the bed at 9:15 and in theory remain in a wet bed for the next 3 hours and 45 minutes. That was horrifying in itself, but when I looked into it further I found that wet beds increase the risk, severity, care time and cost of pressure sores. The figures on the amount of nursing hours monopolised by pressure sores blew my mind: the daily costs of treating a pressure ulcer per patient are estimated to range from £43 to £374 per patient, over an average stay of 5-8 days even more so.

Surely a moisture sensor alerting a nurse that a bed is wet would mitigate this and in turn mean a speedier recovery and a better experience, and save some money in the process. Greatly benefiting patients and the nurses alike. Patient dignity is upheld through not having to ask publicly for help and including a weight sensor means that those that are bedbound don’t have to get out of bed to be weighed several times a day, to be able to quantitate their doses. It should also be a great tool for nurses to save them time and track some of the information they need.

Over the course of my internship I have designed the circuit, made a custom acrylic case and written the code for a device that integrates a moisture sensor and a weighing mechanism. This logs a patient’s weight and a bed status of wet/dry to a CSV file that can later be displayed in graph format. Also in the case of a wet bed, turning on an LED corresponding to the bed number at a nurse’s station.

While I do study circuit design as part of my formal education, building my own circuits rather than someone else’s meant that I needed to have a more in-depth understanding of how they worked and where to find information. Which meant I learnt how to really use the whole data sheet and manufacturers information to my advantage. I’ve previously done work with amplifiers, but using an analogue-to-digital converter in conjunction with an amplifier to create an easier to work with signal from my weight sensor was a challenging and educational process. I’ve learned entirely new skills like using software like Inkscape and Fritzing to my advantage, creating design layouts before physically making them.

I have been given the opportunity to improve my soldering techniques and even had the chance to help run a soldering workshop at a local school as part of my role as a STEM Ambassador.

I had never previously had the opportunity to work with things like the Adafruit prototyping board shown below.

I also got the chance to work with soldering different types of wires and plugs sockets, rather than just small components on a board.

In such a short time I’ve gone form never having even heard of Python or using a Raspberry Pi, to being able to understand functions and strings etc. I can now interpret code and write my own. The program I created communicated with an ADC, returned values and wrote them to a file.

Though I am now only familiar with Python, I have found when looking at other computer programming languages that they generally use very similar instructions, and it has given me a great jumping off point for a learning a lot more in this area.

I’ve not only improved existing skills like circuit theory and soldering, I’ve learned entirely new skills, including like HTML coding, blogging and how to use new software and equipment.

I created my own custom case from acrylic, designing it in Inkscape — software I had never used before.

I then learned how to use the laser cutter to manufacture the case.

I also learnt to bend acrylic using an acrylic bender to produce my case.

I’ve learned a lot about the industry, especially about industry standards and dos and don’ts regarding prototyping. For example, even though the casing for the prototype was open sided, I still wanted to make it as close to a the final functioning device as I could. I didn’t want to create a prototype that seemed really cheap to produce, but then once you started to develop it and add in hospital environment standards the price skyrocketed; I wanted to be as accurate as I could from the outset.

I decided to use IP rated connectors suitable for a hospital environment, so that the sensors could be taken out and replaced easily if broken etc.

Not only have I learnt about the design process as a whole, but I enjoyed myself along the way. I’ve added a few strings to my bow and I can’t wait to use them in future projects.

You can read more about the development of Natasha’s project and her learning experiences on DesignSpark: