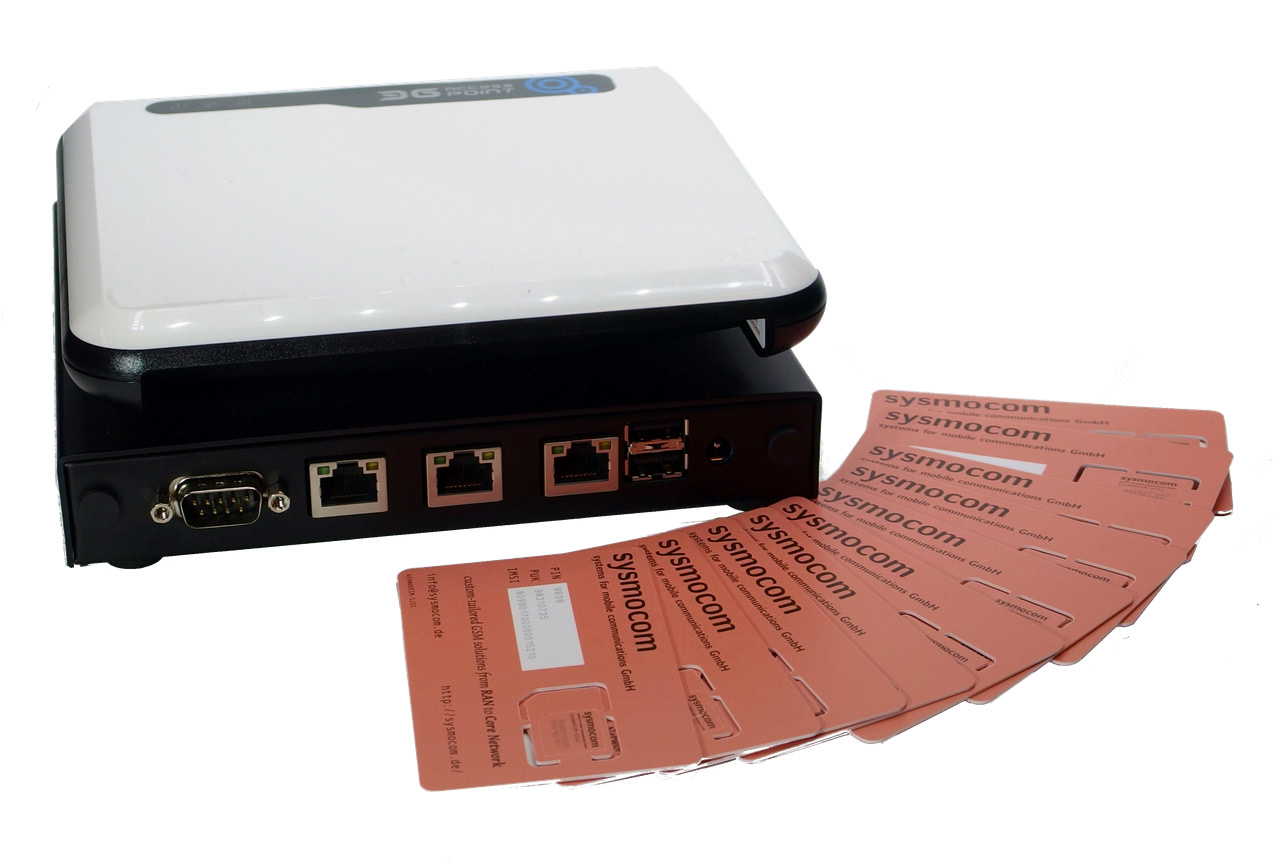 Offering an open platform and designed for everything from Internet of Things (IoT) network deployments to local or extended voice network coverage, the SysmoNITB 3.5G kit is based around the company’s open Network In The Box all-in-one platform and a linked hNodeB 3.5G femtocell. The result: a ready-to-run high-speed private cellular network, complete with ten SIM cards for client devices and four hours of remote support.

“For a limited time and as long as stocks last, we are offering the sysmoNITB 3.5G starter kit limited edition. The starter kit enables you to quickly get started and run a completely autonomous 3.5G network without the need for any additional external components,” the company explains in its announcement. “The starter kit is the ideal entry point for your first steps in setup and operation of mobile networks. Due to its pre-configuration and the complete delivery you can start with a working network. You can concentrate on your application much faster than setting up everything from scratch.”

The new starter kit is due to go on sale in June in limited quantities, with more information available from the official product page or by emailing sales@sysmocom.de.

Linux.com has published a detailed look at work on reducing the size of the Linux kernel and its associated file system before it gets too bloated for embedded use.

Based largely on a presentation at the Embedded Linux Conference by Free Electrons’ Michael Opdenacker, available to watch via YouTube, the write-up paints an initially concerning picture of the state of the Linux kernel for embedded use: stalled projects, a lack of progress towards trimming the fat, and a trend to a larger and larger kernel which could eventually leave it too bloated to be used in memory-constrained embedded platforms common to Internet of Things (IoT) projects.

Thankfully, things soon seem rosier: the piece continues with a look at using compiler optimisations to shrink the kernel by anything up to six percent without any underlying changes to the code. Other techniques detailed to reduce the overall footprint of an embedded Linux system include the use of smaller C/POSIX library implementations, switching to the toybox utility collection from the larger busybox, and using compressed filesystems.

Those developing on the MIPS architecture are advised to seek assurances about the future of the platform from their chosen vendor, following the news that Imagination Technologies is to sell its general-purpose and digital-signal processing divisions.

A popular choice in embedded circles for its good performance within low power envelopes, MIPS was acquired by Imagination Technologies in 2012 in a £60 million deal. Early last month, however, Imagination broke the news that its biggest graphics processing customer was taking developing in-house – putting a £65 million hole in the company’s annual balance sheet.

To fill that shortfall, Imagination has announced the sale of business divisions not directly related to its graphics processing technologies. The biggest of these is MIPS itself, for which the company has not yet announced a buyer, while its digital signal processing (DSP) subsidiary Ensigma and chip design arm IMGworks have also been placed on the block. UK semiconductor design specialist Sondrel has confirmed acquisition of the latter, with the remaining two divisions still in limbo pending acquisition.

Google has officially launched a new dedicated website for its open-source projects, announcing the project at its I/O developer conference along with the first public access to its Tensor Processing Unit (TPU) deep-learning acceleration hardware.

Designed to provide a single point of reference for all Google-led open-source projects, the advertising company’s new website includes an impressive 2,000 projects at present. These range from security and web application frameworks to the company’s Android operating system and Chromium web browser. Each project receives a summary page describing its purpose as well as how it is used internally at Google, along with links to the source code via GitHub repositories with a note of the licence used for each.

At the same time, Google announced that it has added its Tensor Processing Unit (TPU) hardware to its cloud platform, providing researchers and developers working on machine learning projects access to the same high-performance accelerator hardware Google uses internally. To support research efforts, the company also confirmed that it would be making a cluster of 1,000 TPU accelerators – representing around 45 quadrillion floating point operations per second (petaflops) of compute – available to qualifying researchers at no charge as the TensorFlow Research Cloud.

Texas Instruments’ Lou Frenzel has published a guide to signal and power isolation techniques in circuit design on Electronic Design, offering background on the reasons for requiring electronic isolation and the means of achieving same.

Microsoft has released what it describes as a Cybersecurity Policy for the Internet of Things (PDF warning), in the wake of a ransomware attack that has left hundreds of thousands of computers worldwide with encrypted files and a demand for payment.

Following the release of the WannaCry ransomware over the weekend, which infected unpatched Windows operating system devices including those running embedded variants and encrypted files before demanding a $600 payment for the decryption key, Microsoft’s document demands cooperation from manufacturers, developers, deployers, operators, and global governments in order to protect IoT systems against attack.

“This paper addresses the critical task of developing cybersecurity policies for IoT, which has particular urgency because the merger of physical and digital domains in IoT can heighten the consequences of cyber attacks,” the company explains in the whitepaper. “The cybersecurity concerns of IoT user communities – whether consumer, enterprise, or government—provide a convenient lens for identifying and exploring IoT security issues. For example, enterprises and governments may identify data integrity as a primary concern, while consumers may be most concerned about protecting personal information. Acknowledging these perspectives is just the start; the real question is what industry actors and government authorities can do to improve IoT security.”

Finally, crowdfunding site Kickstarter has announced Hardware Studio, a service which it hopes will assist those working on electronics-related campaigns to deliver on their promises and reduce the number of failed product launches delivered by campaign operators.

“Let’s face it: Some Kickstarter projects are trickier to execute than others. If you want to bring a new piece of technology into the world, for example, you need to think about selecting components, pricing them, connecting with the right factory, and so on,” explained Kickstarter’s David Gallagher of the planned launch. “All of that is easier to figure out than it was just a few years ago, thanks in part to the paths blazed by Kickstarter-funded hardware creators. But we think it could be a lot easier. That’s why we’ve teamed up with two industry leaders in this area, Avnet and Dragon Innovation, to develop something new: Hardware Studio.”

The initial launch of Hardware Studio, scheduled for this September, will be split into two main sections. Hardware Studio Toolkit, David explained, will be open to all and offer tools, tutorials, guides, and webinars from Avnet and Dragon designed to improve members’ chances of being able to deliver a functional product should they succeed in their crowdfunding efforts. Hardware Studio Connection, meanwhile, will offer one-to-one advice and services from the two companies’ engineering divisions, but will be upon application only and available exclusively to projects the company describes as “more advanced.”