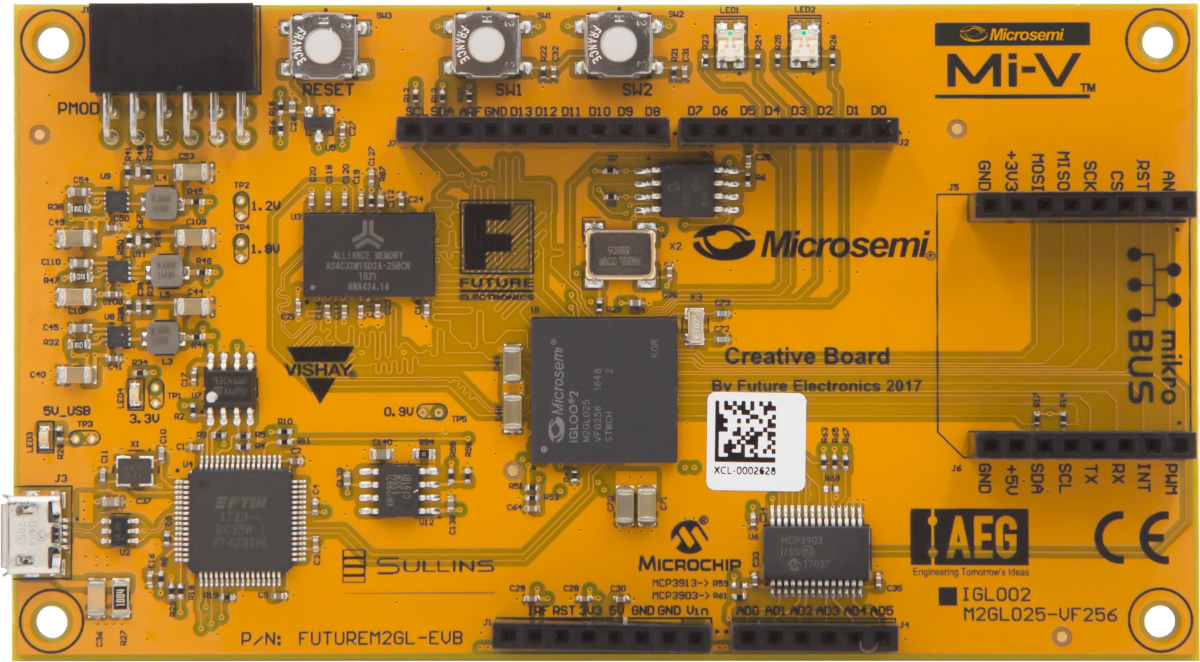 Microsemi has announced it is to help push RISC-V adoption through Mi-V, a new ecosystem which gives those developing on the open architecture full tier-one vendor support from the top down.

“As a leader in RISC-V, we are pleased Microsemi is the first tier one vendor to build out a complete open RISC-V ecosystem which not only supports our needs but contributes to the entire development community,” says Jim Aralis, chief technology officer and vice president of advanced development at Microsemi. “Customers can now select RISC-V for their new designs knowing a tier one vendor committed to the success of this technology is providing all the necessary tools to confidently use RISC-V soft CPUs in their products.”

More information on the Mi-V Ecosystem is available from the official website.

Researchers at the University of California at Berkeley RISE Lab have released FireSim, an open-source cloud instance of RocketChip RISC-V processors running on the Amazon Web Services (AWS) platform.

The FireSim platform simulates the RocketChip RISC-V core with additional peripherals including a network interface card and disk device. This platform then aims to simplify the process of co-designing hardware and software with a focus on data centre usage – including using Linux-based operating systems and scaling to many-core nodes.

More information on the FireSim project is available on the official website alongside a platform demonstration.

RISC-V pioneer SiFive has announced that Flex Logix is adding its EFLX embedded field-programmable gate array (FPGA) to the DesignShare platform, adding yet another string to the ecosystem’s system-on-chip (SoC) design bow.

“There is a critical need in the chip industry to provide a faster, cheaper way for innovative companies to rapidly prototype new, advanced chip architectures,” says Geoff Tate, chief executive of Flex Logix, of his company’s newest partnership. “Through DesignShare, SiFive and Flex Logix can give customers a highly programmable, flexible chip design for both microcontroller SoCs and multicore process SoCs. The RISC-V architecture provides excellent performance, and – when combined with embedded FPGA functionality, can provide higher performance in a reconfigurable way.”

“The addition of Flex Logix’s best-in-class embedded FPGA platform to the DesignShare ecosystem provides engineers with a new and better way to bring SoCs to market,” adds Naveed Sherwani, SiFive’s chief executive. “The adoption of the RISC-V architecture continues to experience significant growth, and the addition of embedded FPGA technologies through DesignShare will make it easier and more flexible for designers to employ RISC-V in their future designs across a wide range of implementations, from embedded devices to the data centre.”

The Linux Foundation has announced the launch of the Community Data Licence Agreement (CDLA), which it claims makes it easier for organisations and individuals to share, analyse, and use data collaboratively.

“An open data license is essential for the frictionless sharing of the data that powers both critical technologies and societal benefits,” says Jim Zemlin, executive director of The Linux Foundation, of his organisation’s latest project. “The success of open source software provides a powerful example of what can be accomplished when people come together around a resource and advance it for the common good. The CDLA licences are a key step in that direction and will encourage the continued growth of applications and infrastructure.”

Inspired by the licences available for open-source and free software, the CDLA comes in two flavours. The CDLA Sharing licence encourages contribution of data back to the community, while the Permissive variant lacks the requirement for recipients and contributors to share back to the community.

“We see the CDLA as being in the forefront of encouraging a shift in how people view data,” claims Todd Moore, vice president for Open Technology at IBM. “Given the growing volume of available datasets, data by itself is no longer the primary source of value. Instead, the ecosystem around the development and mining of trends and insights derived from data holds far more value for society. The CDLA provides the right platform to enable this shift in view and we are excited to be an early adopter.”

Full information on the licence is available at the official website.

Arm’s Mbed division has announced a webinar offering a getting started guide to using the LoRaWAN long-range low-power radio standard via The Things Network, scheduled for the 29th of November.

Hosted by Jan Jongboom and Johan Stokking, the principle applications engineer and developer evangelist for Internet of Things (IoT) at Arm and the chief technical officer and co-founder of The Things Industries and The Things Network respectively, the webinar aims to offer an introduction into using The Things Network via LoRaWAN from an Mbed-based development board.

“LoRaWAN is one of the most exciting new technologies for device communication,” its organisers explain. “It promises over 10 kilometres of range and a 10 year battery life, using unlicensed spectrum, allowing everyone to create a network. That sounds perfect for Internet of Things (IoT) appliances, right? But how do these numbers hold up in the real world? And how is LoRa different from other Low-Power Wide Area Networks (LPWANs) like LTE Cat-M or NB-IoT?”

The event is to run on the 29th of November in morning and afternoon sessions, 0900 GMT and 1700 GMT respectively, with a short question and answer slot after each. More information is available on the official website.

The LimeSDR-Mini crowdfunding campaign reached its $100,000 goal some weeks ago, and earlier this week drew to a close at 250% funded.

We may be a little biased — having worked on a number of demos using a prototype of the diminutive SDR board — but it’s hard to deny that the LimeSDR-Mini represents excellent value for money at $139 for a platform with USB 3.0 interconnect and that is wideband (30.72MHz!), full duplex and covers from 10MHz all the way up to 3.5GHz.

The crowdfunding campaign also saw the launch of the LMS8001 Companion board, which extends the range of all LimeSDR systems — from LimeSDR-Mini to 4×4 MIMO LimeSDR-QPCIe — up to 10GHz, with two channels each of up and down frequency conversion.

So far the LimeSDR-Mini has been demonstrated with GNU Radio, Pothos, the tiny LattePanda Windows 10 PC and CubicSDR, 802.11 PHY plus protocol analysis, LuaRadio, and a Raspberry Pi 3 and ScratchRadio demo — with yet more demos lined up. The LMS8001 Companion has also been shown used to provide repeater links at 5.5GHz and 10GHz, for LTE and WCDMA signals.

Clifford kindly spoke to us on the topics of the origins of Yosys, how many regarded creating a fully open source FPGA toolchain to be an impossible task, and how he now delights in turning engineers who doubt the viability of such toolchains into engineers who say that they could do better.

As always, the full OSSDI series can be found on the AB Open Vimeo page.