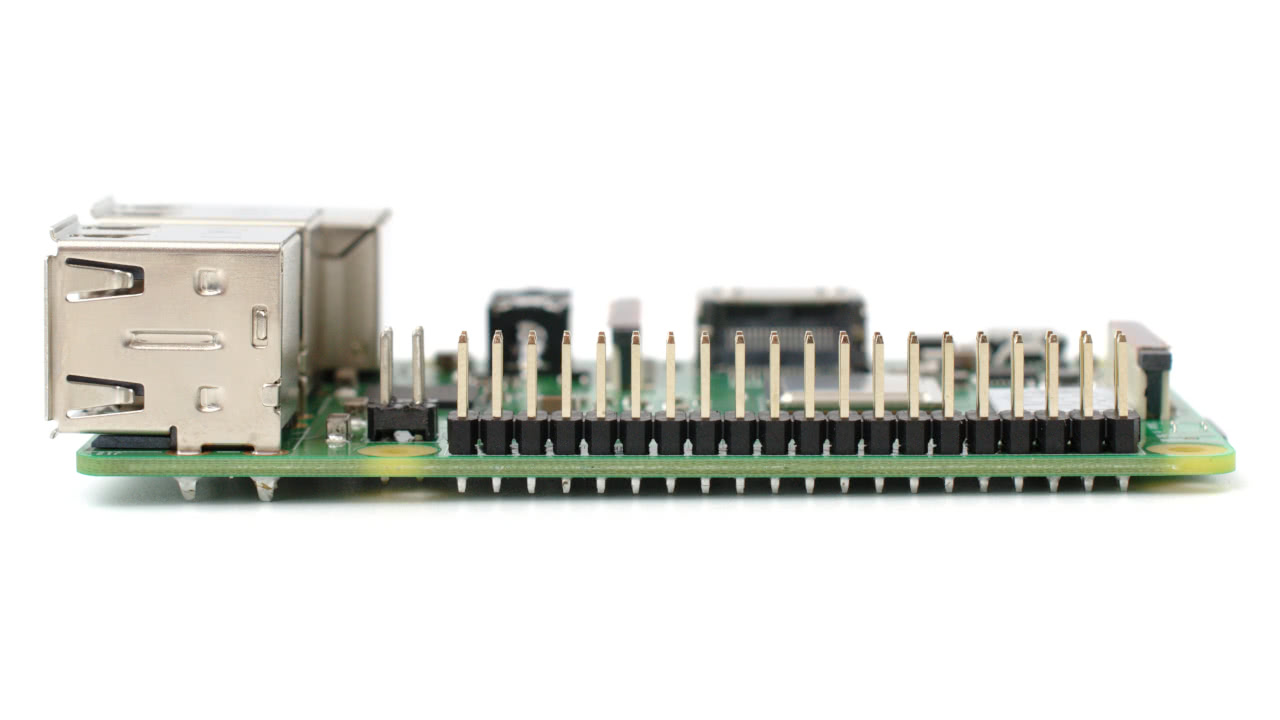 Presented to the public for the first time today ahead of a crowdfunding campaign launch in the coming weeks, Circumference is designed to offer all the functionality of a datacentre environment in a compact and attractive package. Based around clusters of eight Raspberry Pi 3 Model B+ compute nodes and up to four clusters per Circumference, the system offers up to 128 64-bit Armv8 processor cores running at 1.4GHz. The Circumference itself provides power distribution, network connectivity, instrumentation, cooling, and remote console connectivity to all nodes via an integrated UDOO x86 microcomputer front-end processor (FEP).

“The Circumference is designed to simplify the process of developing software for a multi-node cluster environment, drawing a fraction of the power and requiring a fraction the space of a traditional cluster system,” explains AB Open’s Andrew Back of the project’s inspiration. “Its design will be of particular interest to developers and educators working in cloud computing, high-performance computing, cluster, and containerisation, and is supported by simple command-line utilities and a Python programming interface offering full control over the system.”

The custom instrumentation system in each Circumference allows for detailed monitoring and control of all connected nodes. Energy usage, power supply voltage, and temperature can be monitored in real-time, while the Python-based application programming interface (API) offers control of the nodes’ serial console, power, and Ethernet connectivity. The 32-node model also includes per-node power indication and status readouts on six integrated LED matrix displays for at-a-glance monitoring without any additional hardware.

More information on the Circumference, which will be available in eight-node and 32-node models dubbed the C25 and C100, is available on the Crowd Supply pre-campaign page.

The Circumference is designed to use the Raspberry Pi 3 Model B+, a freshly-launched revision to the Raspberry Pi Foundation’s popular single-board computer (SBC) which brings with it a faster and cooler-running processor, gigabit Ethernet and 5GHz Wi-Fi connectivity, and support for Power over Ethernet (PoE).

Launched six years after the first Raspberry Pi Model B, a single-core Arm-based SBC running at 700MHz and with just 256MB of RAM, the Raspberry Pi 3 Model B+ – also known as the Pi 3 B+ – is a considerable upgrade. Building on its 1.2GHz quad-core 64-bit predecessor, the new design features a metal-encapsulated system-on-chip and thicker circuit board which combine with improved power management to provide a speed boost to 1.4GHz and the ability to run considerably cooler under sustained CPU load. The new design also includes gigabit Ethernet connectivity – though limited to around 220Mb/s of real-world throughput, thanks to a design which sees peripherals sharing a single USB 2.0 connection to the processor – with support for Power over Ethernet (PoE) upon connection of an add-on board, and a dual-band radio with 2.4GHz and 5GHz Wi-Fi connectivity along with Bluetooth 4.2 and Bluetooth Low Energy (BLE).

AB Open’s Andrew Back has analysed the changes between the Pi 3 and new Pi 3 B+ over on DesignSpark, while also offering a pair of practical projects well-suited to the board’s new capabilities: a remote software defined radio (SDR) and custom remote-sensing platforms, both of which benefit from the improved connectivity and processor performance.

Speaking of performance, a series of detailed benchmarks are available on Medium demonstrating the improvements made in a range of workloads. Also included are a thermal imaging analysis showcasing how the redesign and new package technology have improved upon the Broadcom BCM2837’s notoriously hot-running processor cores and a look at the power draw across the whole mainstream Pi family.

Finally, business-to-consumer electronics retailer Pimoroni has celebrated the launch with a range of interesting images, including clever ‘X-ray’ shots taken by prising the metal covers from the radio module and system-on-chip and overlaying the resulting pictures, along with layered images of the Pi 3 and Pi 3 B+ demonstrating the changes to the board’s layout – and the presence of the pre-populated PoE header and moving of the unpopulated Run header will be of particular interest to those who have built designs around the previous Pi 3 layout.

Building on the existing LimeNET platform, which pairs the open LimeSDR software defined radio with x86 host hardware, the prototype design replaces the latter with a HiFive Unleashed multi-core 64-bit  RISC-V board and a Xilinx VC707 FPGA development board. The result: a software-defined wireless base station featuring a baseband processor which can benefit from custom hardware accelerators to meet demanding requirements.

“The project is to establish the foundations for a radically open wireless base station architecture with unprecedented flexibility. The combination creates a platform where wireless systems are implemented via software-defined radio, with the ability for custom hardware accelerators to be integrated in FPGA, before progressing to a customised ASIC once their design has been validated,” explains AB Open’s Andrew Back, who has been working as a member of the LimeNET team on the project.

“This fundamental flexibility across both baseband processing and RF will make it possible to bring high-performance radio access network solutions – e.g., for LTE, NB-IoT, and 5G – to market far quicker than ever before and at greatly reduced cost.”

More information, and a demonstration of the prototype’s capabilities, can be found on the LimeNET Crowd Supply campaign page.

The interview includes mention of open silicon’s already modestly successful if largely unknown history, through LEON and OpenRISC ASIC manufacture, Embecosm’s own work on the AAP architecture designed to put compilers through their paces, and the importance of RISC-V.

In closing Jeremy notes how there is a bright future ahead for open source silicon, a point which he illustrates via a number of difficult to ignore indicators, including the year-on-year growth in attendance at ORConf and, a particularly good one: when you start receiving requests from customers to work on RISC-V compiler toolchains!

FOSSi Foundation director Philipp Wagner explained how the newsletter “wants to be your guide and show you around in the world of free and open source digital hardware design. Which open source projects have released exciting new ‘IP’? What recent announcements paint an interesting vision? What events in industry will shape the ecosystem for the time to come?”Adding, “We invite you to join the tour. Be inspired by what happens in the world around you.”

You can read El Correo Libre Issue #1 over on medium.com, sign up to get it direct to your inbox, and news items for inclusion should be sent to ecl@librecores.org.

Mike Wishart, chief executive officer at electronics crowdsourcing platform efabless, has issued a call for a move beyond open source software and into the realm of “open innovation.”

“Embedded open source software not only works; most our world runs on it today,” Mike writes in the introduction of an opinion piece published in the EE Times this week. “That said, the real story is open innovation, of which open source licenses are simply one part. Open innovation means looking outside traditional corporate silos to harness the collective knowledge of a global community of developers and using that community to create new and transformative things.”

Mike points to real-world examples of open innovation – open source software, Maker Faires, hackathons, and the like – as a call-to-arms for the world of electronics and hardware, calling for a “connected community of like-minded inventors with complementary skill sets collaborating in a frictionless manner.” This, he explains, will bring the same benefits to the world of the integrated circuit as have been enjoyed by the open-source software community.

“The timing is right for the semiconductor industry to embark on this journey and accelerate the proliferation of community-created IoT solutions,” Mike claims. “Welcome to the world of open innovation.”

Mike’s article can be read in full on the EE Times now.

Finally, The Linux Foundation has announced the ACRN (pronounced “Acorn”) Project, an effort to develop a reference hypervisor for the Internet of Things (IoT) in the face of existing solutions being too bulky and unwieldy for embedded use.

“With project ACRN, embedded developers have a new, immediately available hypervisor option,” claims Jim Zemlin, executive director of The Linux Foundation. “ACRN’s optimisation for resource-constrained devices and focus on isolating safety-critical workloads and giving them priority make the project applicable across many IoT use cases. We’re pleased to welcome project ACRN and invite embedded developers to get involved in the new community.”

“ACRN will have a Linux-based service OS and the ability to simultaneously run multiple types of guest operating systems providing a powerful solution for workload consolidation,” adds Imad Sousou, corporate vice president and general manager of the Open Source Technology Centre at Intel, of the technology his company has donated to the project. “This new project delivers a flexible, lightweight hypervisor, designed to take real-time and safety-critical concerns into consideration and drive meaningful innovation for the IoT space.”

Project ACRN, which includes a hypervisor and a device model, is available now at the official website under a custom licence which allows for modification and redistribution in source or binary forms providing Intel’s copyright notice is kept intact.