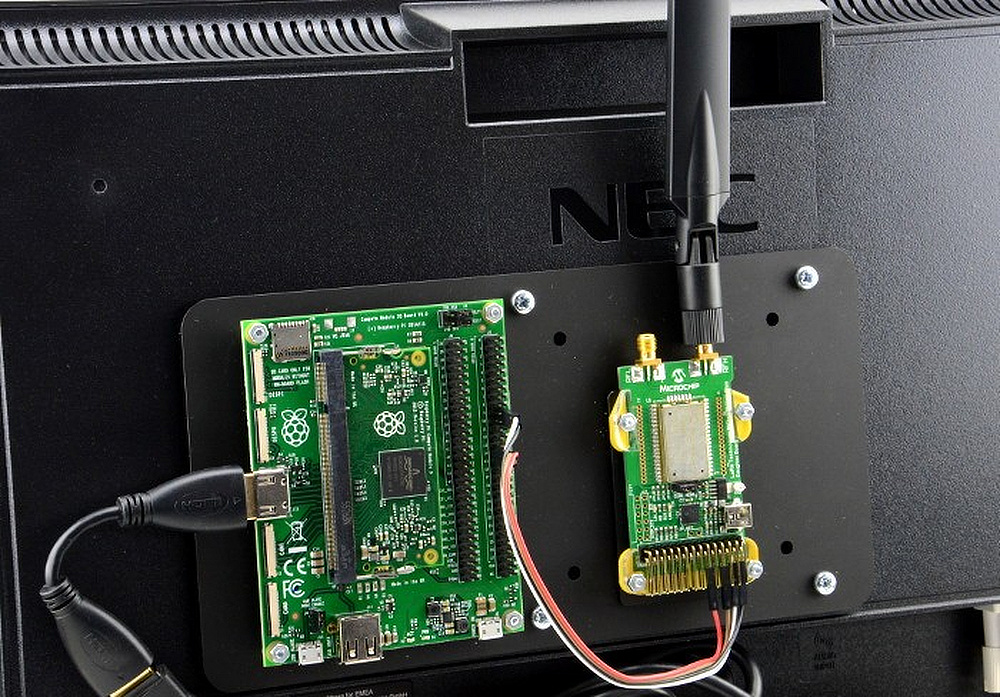 If you’ve ever wondered how difficult getting into long-range, low-power wireless networking might be, our own Andrew Back’s post over at RS DesignSpark should help put your mind at ease by building a quick and easy remote signage system connected to a LoRaWAN network.

Based around a Raspberry Pi Compute Module 3 compute-on-module (COM) linked to a Microchip RN2483 PICTail via just four wires, the remote display system – connected to a standard desktop monitor for the proof-of-concept but well suited to larger display types for digital signage purposes – can be addressed and updated via The Things Network with no data or access fees payable and over ranges up to 15km.

If that little demonstration has tickled your fancy and you’re nearby in the Calderdale area, you may be interested in joining the LPWAN technology programme we launched late last month in partnership with IoTUK Boost, RS Components, The Things Network, and Calderdale Council.

Response to the call for participation has been strong, with local businesses and entrepreneurs applying to receive hands-on training, prototyping hardware, and 12 months of support for building a new platform or integrated LoRaWAN technology into their existing platforms. The application process is open through to 1st of March, with more information available on the official website.

jInvent, a German embedded engineering company founded in 2008, is set to launch a crowdfunding campaign on Valentine’s Day for a device for which the company clearly hopes developers’ romance will blossom: the iolinker.

Designed for use in everything from hobbyist projects through to industrial mass production, the iolinker is a field-programmable gate array (FPGA) on a board which acts as an IO extension to any connected device. Features include 49 GPIO pins with hardware pulse-width modulation (PWM) signal generation, custom clock outputs, and the option to chain up to 7 boards. The FPGA at its heart, a Lattice LCMX03L, can also be reprogrammed on demand for custom applications.

Digilent, meanwhile, has already taken Kickstarter by storm with its latest design: the open hardware OpenScope oscilloscope platform, which is designed to be as platform independent as can be through a smart on-board network module.

While the specifications of the OpenScope, which is based around the PIC32MZ microcontroller, won’t have anyone throwing away their Fluke or Agilent, the project shows real promise thanks to an entirely open approach: the hardware and software are both open, with the user being able to address the board through a browser-based package dubbed WaveForms Live. Pricing for the board has been set at $79 (around £63), with Digilent having already easily beaten its modest $10,000 goal to fund the first production run.

Anyone interested in developing their own system-on-chip (SoC) is advised to check out a new white paper on the subject from Mentor Graphics, which promises to walk the reader through development at zero cost.

Using ARM’s DesignStart software and a selection of Mentor Graphics tools, the white paper describes the rapid development of a proof of concept design for an analogue mixed-signal SoC – and, being software-based, promises that it costs nothing but time, making it possible to make what the company describes as a “fast go/no-go decision” before becoming too heavily invested in a potentially dead-end development project.

Erich Heinzle has published a guide designed to help users of the gEDA circuit design software boost the quality of their creations by adding support for the Freerouting autorouter, improving on gEDA’s built-in autorouting capabilities.

While no autorouter in the world can improve upon hand-laid tracks, it’s hard to deny that the ability to press a button and receive a functional and connected circuit is great for rapid prototyping. Using a few intermediate tools, Erich was able to use Freerouter to create a neater set of routes than gEDA’s integrated autorouter – thanks largely to its support of 45 degree angles, rather than the 90 degree limit of gEDA’s autorouter.

Bulgarian open hardware specialist Olimex has announced the impending launch of the Teres I, a completely open hardware laptop based around a 64-bit ARM Cortex-A53 processor.

Priced at €225 (around £192), the Teres 1 kit includes a display, casing, keyboard, touchpad, battery, camera, Wi-Fi and Bluetooth radios, quad-core ARM single-board computer (SBC), and all the extra components needed to turn it into a functioning laptop – with the added twist that all the designs, from the circuits to the chassis, are released under a permissive licence. Olimex is due to open orders for the device soon, once the software for the laptop has been finalised and tested.

Finally, the North’s leading technology festival Wuthering Bytes has been confirmed as coming back for another year, and bringing with it companion events including ORConf (formerly the OpenRISC Conference), the Open Source Hardware Camp (OSHCamp), and a two-day FPGA workshop dubbed Chip Hack.

Beginning with the traditional Festival Day in Hebden Bridge’s Town Hall on the 1st of September, this year’s Wuthering Bytes schedule is jam packed with everything from talks and hands-on workshops to the EDSAC Challenge – a live attempt to build a working model of the world’s first practical general-purpose stored-program electronic computer within an FPGA. Full scheduling information is available on the official website.